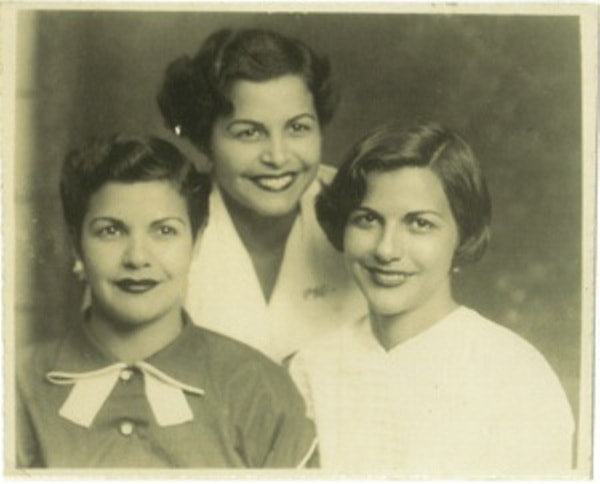 The Mirabal-Reyes family was a prosperous family from a town in Salcedo called Ojo de Agua. In 1923, Enrique Mirabal Fernandez married Mercedes Reyes Camilo, better known as Chea. A year later their eldest daughter Patria was born. Don Enrique was a farmer and merchant born in a town of Santiago called Tamboril. He owned his own farm, shop, coffee mill, meat market, and rice factory. Doña Chea was herself from a middle-class family in Ojo de Agua.

​Born into a family of landowners, the four Mirabal sisters—Patria, Minerva, María Teresa, and Dedé —grew up in a highly conservative and sheltered environment in the rural town of Ojo de Agua in Salcedo Province, Dominican Republic. Their father Enrique kept them on a tight rein. Although their mother Mercedes was barely literate, she recognized the importance of education. Mercedes convinced her husband that if their daughter Patria, who hoped to become a nun, sought to be educated, then the path to learning should not be denied her sisters. As they matured, all four sisters developed social consciences, realizing that daily life in their country had been distorted for an entire generation as a result of Rafael Trujillo's dictatorship.

One of the Mirabal sisters, Minerva, had firsthand knowledge of the dictator's nature. At age 22, having turned down sexual overtures from Trujillo, she was jailed and banned from continuing her law studies. During three years under house arrest at her parents' home in Ojo de Agua, she passed the time painting watercolors and writing poetry about the suffering endured by the exploited poor in her country. Eventually, Minerva returned to her law studies and graduated with the highest honors from the National Autonomous University of the Dominican Republic.

The successful Cuban revolution, which led to the coming to power of Fidel Castro in January 1959, played a major role in radicalizing many Dominicans, including the Mirabal sisters. In the first phase of the Cuban revolution, before it became enmeshed in the bipolar struggles of the Cold War, many Latin Americans could detect a major step forward in the struggle for social justice in a part of the world where millions had long been denied the basic elements of a decent life. As the desire for social justice began to stir in the Dominican Republic in 1959, the response of the Trujillo dictatorship was swift and brutal. Hundreds were imprisoned, many were tortured, and some simply disappeared, never to be seen again.

For almost his entire dictatorship, Trujillo appeared to be impervious to attack by his enemies. Invasions by Dominican exiles—the first in June 1949 and the second exactly one decade later in June 1959—proved miserable failures. The latter invasion was a catastrophe, even though it had received considerable backing from Castro and included a number of veterans of the anti-Batista guerillas who had fought in Cuba's Sierra Maestra mountains. Despite these demoralizing defeats, the anti-Trujillo underground forces within the Dominican Republic continued to plan and plot for the overthrow of the hated dictatorship. By 1959, these revolutionaries included the Mirabal sisters, each of whom had different reasons for their participation in such a dangerous undertaking. The eldest sister Patria joined the underground because of an essentially religious thirst for justice and peace. Minerva was intent on becoming a tough-minded, fearless revolutionary free of any illusions about the dangers she was facing. The other two sisters were a study in contrasts: María Teresa, the youngest and most naïve, believed that something must be done to rid her nation of the evil Trujillo, whereas Dedé, the only sister who would survive, never completely accepted the rationale of resistance.

By 1960, Patria, Minerva, María Teresa, and their husbands had become thoroughly enmeshed in the growing anti-Trujillo resistance movement that began to sweep the Dominican Republic. Their husbands, having been involved with the failed revolt of June 1959, were arrested and imprisoned. The U.S.--which had long supported Trujillo's dictatorship as a pillar of pro-business, anti-Communist stability in the region—now began to distance itself from a regime whose very existence provided Castro and other Latin American revolutionaries with more than sufficient justification for a revolutionary upheaval. Known within the underground Movimiento Revolucionario 14 de Junio (MR14J) by the code name of Mariposa (butterfly), the sisters soon became known for their activities to agents of Trujillo's secret police, the dreaded SIM. They were arrested but released after a short time (for Minerva, this was the third imprisonment in her revolutionary career).

By the closing months of 1960, Trujillo had lost patience with the revolutionary movement and particularly with the Mirabal sisters. He had toyed with the idea of assassination for some time but had been talked out of it by advisors, who impressed on him the negative image this would create for his regime and possibly for him personally. Now, however, incensed by their fearless refusal to cease their oppositional activities, Trujillo gave orders to kill the sisters. Enticed by a ruse, the Mirabal sisters thought that their request to see their imprisoned husbands had finally been approved. On the way to the prison on November 25, 1960, they were arrested, subjected to horrific torture, and killed.

To hide the nature of the crime, their bodies (and that of their driver, Rufino de la Cruz) were placed in their own jeep which was pushed over a high cliff a short distance beyond Santiago, off the winding mountain road that crosses the Cordillera Septentrional to Puerto Plata. When the deaths were reported in the press, including Trujillo's puppet newspaper El Caribe, few readers at home or abroad were fooled by the story of an "automobile accident" that took the lives of Patria, Minerva, and María Teresa Mirabal. Soon, reports of torture inflicted on the sisters before their vehicle plunged off the cliff appeared in a story in The New York Times.

A number of months before his own assassination, Trujillo chose the same stretch of mountain road where the Mirabal sisters' jeep had fallen as the site for an evening stroll. With him was an intimate associate who knew the details of the assassinations. Pausing, Trujillo gazed silently over the precipice and down the steep slope. Then to the surprise of his companion, he said, "This is where the Mirabal women died—a horrible crime that foolish people blame the government for. Such good women, and so defenseless!"

By the 1980s, Dominicans had begun to appreciate the supreme sacrifice made on their behalf by the Mirabal sisters. Books, articles, museum exhibitions and a commemorative stamp all testified to a national urge to honor the women. Throughout the Dominican Republic, and the Latin American diaspora, the Mirabal sisters became feminist icons, with the anniversary of their deaths being commemorated every November 25 as the International Day of Violence Against Women.

Patria was born in 1924. When she was 14, her parents sent her to a Catholic boarding school, Colegio Inmaculada Concepción in La Vega. Three years later, she left the school to marry a farmer, Pedro Gonzales, who later aided and supported her in challenging the Trujillo regime. They had four children: Nelson Enrique, Noris Mercedes, Raul Ernesto, and Juan Antonio (who sadly died five months after his birth). For their part in the attempts to overthrow Trujillo, the ever-religious Patria and the anti-trujillista Pedro had their property and home seized by the government. Nonetheless, Patria supported her sister Minerva in her anti-government efforts, and opposed Trujillo because she was concerned for the future of the country's children. She was 36 when she died.

​Patria said, “We cannot allow our children to grow up in this corrupt and tyrannical regime. We have to fight against it, and I am willing to give up everything, even my life if necessary.” – “Mirabal Sisters History,” “Mirabal Sisters Cultural and Community Center,” 7th March 2016.

Bélgica Adela ("Dede") was born February 29, 1925 and was not with the rest of the sisters when they were killed. Her husband, Jaimito, discouraged her from becoming involved in her sisters' revolutionary activities; however, she ultimately could not be dissuaded from actively opposing Trujillo's violent regime. After her sisters' deaths, she dedicated her life to preserving their memory, opening a museum in their honor. She also took care of her sisters' surviving children and had 9 children of her own, one of which is Jaime David Fernandez Mirabal. He served as the vice-president during Leonel Fernández’s first term as president between the years of 1996 and 2000. She died at age 88 on February 1, 2014 of pulmonary fibrosis.
​

Minerva, born on March 12, 1926, showed signs of intelligence even at a young age. By the time she was seven years old, she could recite the verses of French poets. She was sent to the Catholic secondary school Inmaculada Concepción at the age of twelve with her sisters Patria and Dedé. She graduated in 1946, having studied Letters and Philosophy. She enjoyed writing and reading poetry, especially that of Juan Pablo Neruda. Like Patria, she also liked art, especially that of Pablo Picasso. In December of 1949 she was taken to the capital and placed under house arrest with Doña Chea while Don Enrique was being held in Fortaleza Ozama. She attended the University of Santo Domingo, where she met Manuel (Manolo) Tavarez Justo. The two married on November 20, 1955, and moved to Montecristi. They had two children: Minu and Manolito. Minerva's political influences included changes occurring in other Latin American countries, the Luperion Invasion and the revolution in Cuba. Minerva admired the up and coming leftist revolutionary Fidel Castro and would recite his famous words, "Condemn me, it does not matter; history will absolve me!" She was 34 when she died.

​Minerva is quoted as saying, "…it is a source of happiness to do whatever can be done for our country that suffers so many anguishes, it is sad to stay with one's arms crossed…"

Link to a letter that Minerva wrote to Trujillo in 1953. In the letter, Minerva exalts Trujillo so that he will allow her to continue her legal studies. The letter is an English translation; I have been unable to locate the original letter in Spanish.
​

Maria Teresa, the youngest of the Mirabal sisters, was born on October 15, 1936. She attended Inmaculada Concepción after the rest of her sisters. In 1954 she graduated from the Liceo de San Francisco de Macorís in Mathematics, and then went to the University of Santo Domingo to study math. On February 14, 1958, she married the engineer Leandro Guzmán, and on February 17, 1959, gave birth to their daughter Jaqueline. Maria Teresa followed and admired Minerva, and became involved in her sisters' political activities. On January 20, 1960 she was detained at a military base in Salcedo and freed the same day. Two days later, on January 22, she and Minerva were arrested and taken to La Cuarenta, the infamous torture prison, and then transferred to La Victoria. They were freed on February 7, 1960. On March 18, 1960, she and Minerva were once again taken to La Cuarenta, having been sentenced to five years for threatening the security of the state (this sentence was reduced to three years on appeal). The two sisters were freed on August 18, 1960. She was 24 years old when she died.

​She is quoted as saying, "perhaps what we have most near is death, but that idea does not frighten me, we shall continue to fight for that which is just…"

The second home of the Mirabal sisters has been turned into a museum. Check out their website here.
Article on the sisters' bravery: Las mariposas: the Mirabal sisters' role as heroines of the Dominican Republic
Article on women's role in the early suffrage movement in the DR and its connection to Trujillo
Article on women's activism during the Trujillo regime as instrumental in turning the tide in the anti-Trujillo movement (linked below)